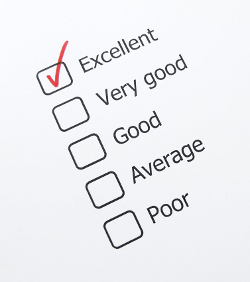 In July 2009, a new blogger entered the same gaming niche as my blog. His blog looked like it had a lot of potential. He posted daily including several 1500+ word posts. He was very active on Twitter. He wrote several guest posts. He scored an interview on a popular blogging blog. With these efforts, he quickly made an impact in the industry and his traffic and Twitter followers grew quickly.

You could tell that he spent a lot of time building his blog and it seemed like it would only be a matter of time before he became a top five blogger in the niche. However, his initial enthusiasm only lasted three months. After that time, he started posting less and less and in December, he made his last post – one short of the 100 post milestone.

What happened? How did the promising blogger end up in the wasteland of abandoned blogs?

Too Much Feedback is a Bad Thing

One thing I noticed was his obsession for feedback. He was always asking his blog readers and Twitter followers for topics to write about. Also, he used polls all the time to determine the topics of his posts.

He had a diverse audience who wanted to talk about many different topics. He didn’t filter his feedback and wrote about all the different topics. As such, his blog became very unfocused. I stopped reading it because I never knew what to expect.

He catered to his whole audience but his traffic plateaued once people realized that he was going to serve everybody. Without a strong focus, people liked his blog but no one really loved it. And ironically, less and less people responded to his requests for feedback.

I think it’s important to have a long-term vision for your blog that trumps reader feedback. You shouldn’t give up too much control to your audience. You are the expert.

Apple didn’t ask their customers for feedback on the iPhone. If anything, they probably would’ve requested too many features and made the iPhone just like the other smartphones. The iPhone works because it has less features which makes it easier to use than its competitors. This was the vision of Apple and they weren’t going to let feedback change their course.

Consider the creators of popular TV shows. I bet their shows would be much worse if they implemented audience feedback on a regular basis. Before the actors were even hired, they had a vision for their show and they knew that straying from that vision would hurt their show.

Therefore, have a concrete vision for your blog. The blogger I first mentioned didn’t have one and it cost him.

This is not to say that you shouldn’t listen to feedback. Feedback can be useful. Just don’t let it trump your long-term vision.