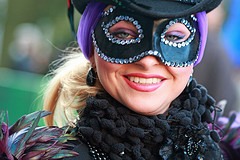 Don’t or can’t use your real name when you blog? You can still build a personal brand, albeit around a fictitious character. Or maybe that character doesn’t have to be all that fictitious, and can be based on your interests, reveal a facet of you. Thus, it may be worthwhile choosing a Web moniker and building a persona around that.

Why a Web Moniker?

Blogger “Johnny B. Truant” is obviously a real person using a fictitious name. He discusses on Copyblogger today what prompted that choice, and how “Johnny” is just as real as the person behind the name. While in some blogging circles it’s believed that blogging is very personal, one on one, and real names should be used, others believe differently. I’m of the belief that if there’s no moral or legal hitch to using a moniker, then why not — except possibly when a business executive writes on a company blog? If blogging involves telling stories, as so many bloggers have written, then cutting loose a persona based on a moniker might free you up to say what you’d really like to say, without the concerns you might have about being judged by friends, family, or colleagues.

A moniker and Web persona, as Johnny B. suggests, lets you loose to write real copy, and gives you the freedom to stop censoring yourself. The moniker gives you the license to create a persona that you want to be known as, and thus gives you the confidence you need for blogging.

I’ve coached many aspiring writers over the years, and confidence is one of the fundamental roadblocks that stops people from just writing. Cutting loose with a few monikers also lets you explore different writing styles on an ongoing basis, letting you naturally choose one to build a persona around. This is the number one reason I’ve cultivated different monikers since I first started blogging in 2002, though I’ve essentially tried to build only one persona.

Unlike Johnny B. and others — especially the Fake Steve Jobs types — my monikers were not intended to stay secret; nothing stays secret online for long. Rather, when I really started blogging seriously in 2005, with the intent of making it part of my career, I was not sure how widely blogs would be read, nor what topics would be popular. I have always had multiple interests — a fact that sometimes means I have a hard time deciding where to put my efforts. (There’s also a fear that I’ll pick the wrong niche.) As a result I’ve ended up with multiple monikers over time that revealed a different facet of the real me. But as far as a persona goes, I’ve usually tend towards favoring just one, Talespinner — though as of late, that has morphed into the UltraGeek.

In choosing your moniker to build a persona around, brainstorm off of your niche as well as your personal interests. Maybe you have a nickname you’re know by, or an interest you’re known for. Try word games that combine your interests, your nicknames, the names of celebrities, rhyming words and so on.

For example, I’ve had a long-standing interest in food from a cultural standpoint. It just so happened that in my Toronto days, I went through a long hybrid Rockabilly-Punk phase and thanks to my Elvis Presley hairstyle and the clothes I wore, I used to be known by some friends as the Punk Elvis or Elvis Parsley. The name is a double play on words. First, parsley is a common ingredient in East Indian cooking. Second, Parsley is a play on Elvis Presley’s name. Result: my “Curry Elvis” persona for my cooking blogs, when I was still pursuing the idea that I might launch a Web-based cooking show. (During my computer career hiatus, just before I started seriously blogging, I went to cooking school and worked in a dozen or so restaurants for a few years.) So this persona potentially suited me, but in reality it didn’t suit my ultimate online objectives.

I never built up the Curry elvis persona, mainly because publishing cooking blogs didn’t seem capable of paying the bills, but also because it gets hard to maintain an Elvis-like persona as you get older — something that might be necessary were I to appear in video. My subsequent monikers were due to my personal interests morphing through different niches, including self-improvement, music, writing, etc. For example, Curry Elvis became Punk Monk.

I don’t want to or need to bore you further with my other monikers and personas. They’re not that hard to find, if you’re interested, but the gist is that you can use a similar approach to choosing a moniker and building your Web persona as I did. Though decide on your online objectives before you pick your moniker.

Once you’ve picked a moniker that you like, you can build a “personal” brand, a persona, around it through blogging, creating new jargon, and promoting the persona through social media — just like you would do for the “real” you. I wouldn’t recommend trying to build more than one persona; it just takes too much effort. Brainstorm a few monikers, even use them for blogging different niches, but ultimately focus on just one persona. Johnny B. suggests that you should actually become your persona, at least online — which is difficult to do if you fragment yourself into too many personas. Fragmentation, as far as I’ve experienced will hold back your blogging success.

Now, some niches — such as entertainment, design, photography, writing, music, marketing and anything else creative — are well-suited to having a blogging moniker because they can and do often involve storytelling as well as “personalities.” The choice of a blogging moniker might not suit if you’re blogging for clients, though you never know. It really depends on the client and their niche; just ask your clients.