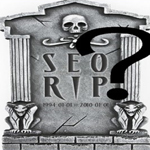 You’ve heard it before. SEO is dead. X service is a Facebook, Twitter, or Google killer. And here we are, multiple years after each of these things have been said, over, over, and over again, and none of the above things have happened.

Surely, some things have been killers of other things, and it’s been stated in a similar way. But if we look at history, these kinds of predictions have always been greatly exaggerated and always radically off. But they continue to come – and why? Because it’s traffic-bait, attention grabbing hyperbole that makes people stop and wonder if yes, their jobs will be lost or yes, someone else’s job is going to be lost.

But that shouldn’t be for you.

A socially responsible blogger will do none of these things – they will look past absolute declarations and link bait for more intelligent, relevant discourse – stuff that doesn’t threaten employment, companies or otherwise.

In some ways, this kind of talk is the technology and blogging equivalent of writing for a gossip mag. Yes, some super small percentage of the time, it’s correct. And some not as small percentage of the time, it gets everyone’s attention. But every time, you make yourself look bad. People are snickering about it. And it’s not the kind of traffic you want. You want traffic that makes people admire your work, not disregard it for its negative content. Because sometimes, people can attract traffic just because.

But a great blog, that will persist, will do it the other way – and they’ll also do it in a way that’s redeeming to the social consciousness. I have yet to read a “Dead” or “Killer” post on a blog that I’ve returned back to. But I have read them. So decide, yourself, whether or not it’s worth the effort.

And if you want a readership and to make a difference and to sell products, ask yourself if saying something is a killer or dead will really move you towards those goals. And more importantly, will they do it in a way that you’re really proud of as a writer.

More Efficient Options
There are alternatives. If you really believe something changes the game, try and at least promote it intelligently. Rephrase it in something that’s not so shocking – because most of the time, it’ll just be flat wrong. But if you said something like “this new Google update will make SEO less effective”, you might actually have a point. If you said something like “Google will eventually make Yahoo! Less viable”, you would have been right. But if you said “Google is going to kill Yahoo!” you would have been very, very wrong. And really, you would have also have been a jerk. Because there are a lot of employees at Yahoo!. And although many are getting laid off, every post besmirching such and act is depressing to said people – and really doesn’t contribute much to collective consciousness. We can do better.

Let’s kill all this talk. Please?