There are many factors that determine your site’s authority, trust and general ranking. One of them is Google’s PageRank, though not everyone subscribes to this theory. I believe Google PR has a great deal of value as a metric for gauging the success of your blog. That’s especially true since many ad networks and “pay per review” services determine your earnings per unit using PR, amongst other metrics.

Google PR itself is determined by several factors. This is a very light treatment of Google PageRank (PR) and should not be construed as gospel. I don’t profess to know the entire algorithm as its nuances are a mystery to most outside of the search engine team, no doubt. But a general look at how PR is built up should help you understand why some new blogs take longer to rank than others. If history is any indicator, you have less than 90 days before the next PR rollout, so your link building efforts should start now, especially if you have a new blog.

Understanding PR buildup will also help you understand some of the reasons why your new blog is taking so long to get web traffic. I’m trying not to clutter the discussion with too much technical description. What’s important is that PR can be used as a loose, relative measure of success. It’s not enough in and of itself, but it’s something concrete. Here’s a loose summary of my thoughts on PR.

Let’s look a bit further at the last point. Those numbers of links are based on my readings. They may change at any time, or already have changed, judging by some of the strange drops that I’ve witnessed or read other bloggers mention. They’re for illustration purposes only. There’s more to PR building than just getting links, but it’s an important factor.

If you are getting some new backlinks every day because your blog is so fantastic, you can figure out how long it might take you to reach your target PR. For example, one new Google-legitimate link per day will take you about three years to get to PR6 – provided the algorithm hasn’t changed drastically. If you’re not getting even that, it’ll take you a long time to get where you’re going – presumably PR10, because doesn’t everyone want that? 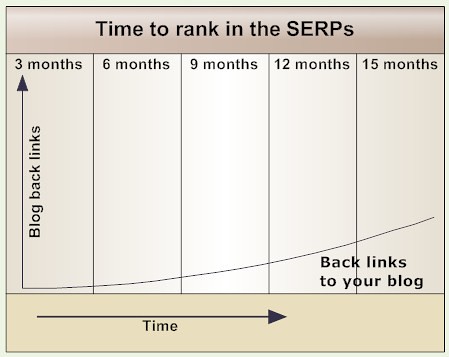 On the other hand, if you can reduce the time needed to acquire a certain number of links, through various link building strategies, you’re golden. Tubetorial, for example, gains dozens of new links per day (Technorati link listing), thanks highly in part to the free Cutline WordPress theme. It links back to Tubetorial. (If I understand the way Technorati records new links, it does so when someone actually clicks on a link to your site. It won’t show up until then – neither in Technorati nor in your blogging platform’s control panel.) So Tubetorial is gaining links on a much faster curve. The diagram below shows that (not to scale). 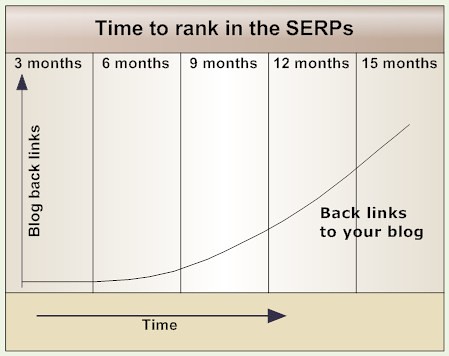 Now I should point out that the bulk of this post was written over two months ago, and Google might discount theme-based links at any time, or they might not. Even if they do, theme links build traffic, which may eventually pay off in editorial links. So don’t discount offering a free theme.

What Can I Do To Increase Links and PR?
This post isn’t intended as a full discourse on building your PR or link building. However, a few pointers:

In summary, if you have a new blog, it behooves you to start building legitimate links as early as possible. The simplest way to do that is to post great content regularly, deep-link your archives, and promote your site by participating in relevant conversation – either in the comments section of related sites or in relevant forums. Any activity that brings you targeted traffic will eventually bring other bloggers who will link to you if they know your site exists.

19 thoughts on “Ranking in the Search Engines: Why It Takes So Long”