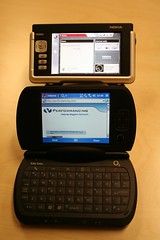 As you know, Nick and I are currently in San Diego on Performancing business. It’s remarkable how well we can do all the things we need to do for the business even while travelling, it means we can be almost anywhere and still get the job done. If you would like to blog on the move you might be interested in how we do it. Also it gives us a chance to geek out about our gadgets! 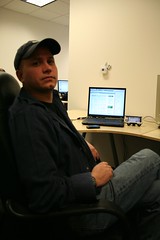 Nick is using an IBM Thinkpad Laptop as his Gentoo Linux workhorse. While we have been here he has also snapped up a cool new Nokia 770 “Internet Tablet” that he has been lusting after for quite a while. This PDA-like device runs a version of Debian Linux and has Wifi and bluetooth capability. In addition to this he has a Plantronics DSP 500 Skype headset and a Motorola Razr phone for voice and to provide the Nokia tablet with GPRS connectivity via bluetooth (strange a Nokia product would not have cell features!).

My equipment has a much more Microsoft flavour. My humble Samsung V25 laptop runs XP Pro, plus I have a O2 XDA Exec Pocket PC (a rebadged HTC running Windows Mobile 2005 for Pocket PC). For voice I have Skype both on my laptop (I use a $9 Skype earpiece/microphone, nothing so posh as Nicks headset) and also on my Pocket PC. The PDA is actually a phone, but I only use it for data and Skype as I have a Sony Ericsson K750i for normal cellular voice calls.

I was really surprised that here in San Diego there is rarely free Wifi. Perhaps naively I thought in the USA it would be overflowing with public bandwidth! Luckily lots of people do not secure their networks (finding a network called “default” is usually a good bet!).

Pay Wifi can be expensive, $15 an hour in some places. At that price, even my expensive 3G/UMTS data plan is more reasonable providing I am only doing email or IM.

When travelling and intending to blog it is worthwhile in addition to a wifi card taking along a spare network cable and a sync cable for your mobile phone. It is not yet the situation where you can rely on getting connected with Wifi even when it is supposedly available.

Dissapointingly neither Nick or I can use PFF on our PDAs. Even though Nicks gadget is running Linux it does not yet have Firefox (though one is in the works), and there is definitely no Firefox for Pocket PC.

Thankfully though both machines have decent web browsers. The Nokia runs a version of Opera and has a 800×480 screen. It would need a USB keyboard if Nick wanted to avoid using the touch screen keyboard or handwriting recognition. The Pocket PC has IE and a 640×480 screen but does have an included keyboard.

Both machines can run IM software, mine using the bundled MSN Messenger plus Skype and Nicks his beloved GAIM. While the Nokia has a bundled RSS reader I use a web based interface which while fiddly works quite well and at least syncs with my desktop.

It is very pleasing that this company is not tied to geography, it truly is a virtual organisation. While already we were spread over countries and timezones, this trip proves we are quite capable of working while mobile. Blogging is very well suited to this kind of approach to working. There is no reason why a travelling blogger should not be able to keep up with events and maintain a good posting schedule, with good time management and planning of course.

How lucky are we that we can do something we really enjoy, find so rewarding, almost anywhere.

Do you blog on the move? Please do tell us about it.

Chris Garrett is a content marketing and blogging coach and co-author of the Problogger Book with Darren Rowse.

21 thoughts on “Mobile Gadgets – Blogging on the Move”