Plugins can be an easy way to increase Twitter Followers and likes on Facebook. They are fairly easy to add for webmasters or developers onto the backend coding of the site and usually begin working immediately. Additionally, plugins are available straight from the social media sites themselves, thus making them more likely to work accurately and not add on any additional code or bugs that aren’t necessary. There are some third party plugins and widgets that can connect to Twitter and Facebook using their API, but unless the original developer plugin isn’t working, these aren’t usually the best option.

All plugins may not be a direct call-to-action to follow or like the company, but any involvement via social media can increase a company’s brand awareness and overall social media success.

Twitter also has four different kinds of plugins for websites, which they call widgets. They include:

Additionally, it is possible to only have the Company Page name and then the like button, with the number of likes. 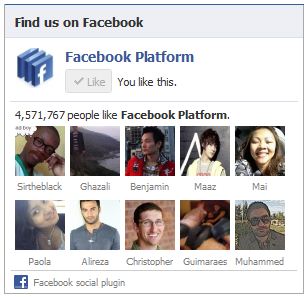 Through the Twitter and Facebook plugin pages, developers can select their preferences to build the custom widget. Once all the preferences are selected, the page generates a code that is copy and pasted into the backend of the website as instructed.