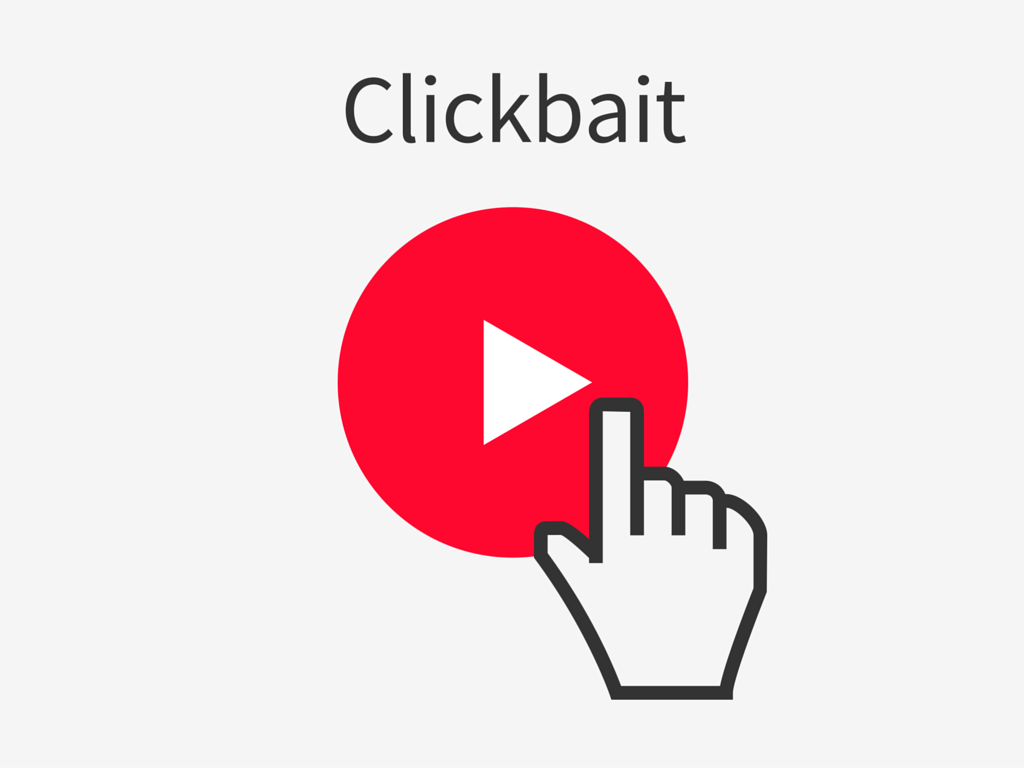 Clickbait. It’s the bane of web content and seems to everywhere these days, should content marketers be using clickbait in their titles to draw attention to their content though?

Online content is predicted to increase by 600% by 2020 and Mark Schaefer has already coined the term ‘content shock’ back in 2014 and discussed how web users and our audience are going to be drowing in content soon. This has resulted in content creators choosing to use clickbait in their titles while others are claiming they are forced to do it as otherwise no-one sees or shares their content.

Clickbait is a term that most web users will most likely know by now. Google defines it as the following:

“…content, especially that of a sensational or provocative nature, whose main purpose is to attract attention and draw visitors to a particular web page.”

“…web content that is aimed at generating online advertising revenue, especially at the expense of quality or accuracy, relying on sensationalist headlines or eye-catching thumbnail pictures to attract click-throughs and to encourage forwarding of the material over online social networks. Clickbait headlines typically aim to exploit the “curiosity gap”, providing just enough information to make the reader curious, but not enough to satisfy their curiosity without clicking through to the linked content.”

Recently, YouTuber Felix Kjellberg or ‘Pewdiepie’ published a video showing him watching clickbait videos and summarizing them so we ‘won’t have to click on them’, the video was of course mainly in jest but it did highlight just how bad some of the very popular video content out there is and the lengths they go to with their titles just to get someone to click on it and view the video.

What he said later on in the video was quite sobering though:

“Clickbaiting: Almost everyone does it. If you don’t do it, you’re not going to get views. I can spend days on a video and it will get less views than a video that we did in 10 minutes that has a better title. YouTube is really unfair in that regard, and what it leads to is good content sometimes getting buried by ‘clickable’ content.”

Felix has by far the biggest Youtube channel with over 46m subscribers and his new videos will often hit 1m views within just a few hours of them being published, so for him to admit that even he has to resort to clickbait titles then it says a lot about the content landscape currently. He goes on to say that it’s a major issue with Youtube content and online media in general. Check his video out below.

Facebook were one of the first major platforms to start the fight back against clickbait. In 2014 they started making changes to their algorithm so that content that was only viewed for very short lengths of time by Facebook users would show up less and less in their feeds, they also put more emphasis on serving a users friends and family content in their feed and less from business pages. With another update to this algorithm just recently, many business pages are lucky to get even a 3% reach to their audience now (without paying that is).

All of this this means that the places where we can push our content to audiences organically is becoming more crowded and competitive, what can we do to stand out from the noise? Should we be using clickbait in our titles too?

Although the Wikipedia definition paints clickbait in a bad light it does also mention things such as ‘curiosity gap’ and ‘make the reader curious’ both of which are all good copywriters and marketers should be using in their titles. The term ‘curiosity gap’ was actually first coined in the mid 1990’s long before social media (or content marketing as we know it) existed, George Lowenstein a US economics and psychology academic published a paper on the topic in 1994.

“Curiosity has been consistently recognized as a critical motive that influences human behavior in positive and negative ways at all stages of the life cycle. It has been identified as a driving force in child development and as one of the most important spurs of educational attainment.”

Curiosity is something that markets and copywriters have been using for decades and our job as modern day content creators and story tellers is to pull our audience into our content and away from someone else’s. Smart copywriters can use these tactics to draw the user into their copy and keep them engaged there. If your content fulfills the the curiosity that the reader had when seeing the title then it is not clickbait!

Playing on the audience’s emotions, feelings and curiosity is a natural part of copywriting and content creation and should not be shied away from. Some good examples are:

So when do we know if it’s ok or not to use clickbait in our titles? If you are unsure whether it’s suitable or not, ask yourself these questions first:

How is the audience going to feel after reading this content?

Is my content delivering what is promised within the title?

How will this affect my brands integrity and reputation?

What do I want the user to do once they have finished reading this content?

If the reader is not going to find the answer to what brought them into your content then they are going to be unhappy and leave the page, they may or may not return but if this is happening with hundreds or thousands of users then eventually this is going to have a damaging affect on your brand and authority. As mentioned above Facebook have already started to combat this and Google have for many years preferred ‘long clicks’ over short ones.

What are your thoughts on clickbait?

David is lead digital marketer at Performancing, he also blogs at Bloggingtips.com and Bloggingpro.com.

6 thoughts on “Should We Give In To Clickbait When Creating Content?”